Why isn’t Victoria on the Container Deposit Scheme bandwagon?

Victoria is one of only two Australian states that have not implemented a container deposit scheme, with the other being Tasmania, despite overwhelming public support for a scheme. A Total Environment Centre report showed that 84% of Victorian's would support the introduction of a container deposit scheme. Only seven per cent were opposed to the idea, with nine per cent still undecided.[1]

In addition to public support, the concept is now also supported by the Australian Beverage Council – an industry that has historically been opposed to any form of container deposit schemes. In an interview, Alby Taylor, General Manager of the Australian Beverage Council, said “Our industry is now far more environmentally aware. We understand it’s important for us to play a part in the cradle-to-grave cycle of containers.”[2]

The introduction of a container deposit scheme is also backed by industry experts, with Deakin University recycling expert Mr Trevor Thornton saying that “South Australia’s deposit system, introduced more than 40 years ago, had been highly successful in collecting bottles and cans. It really has brought those items out of the waste stream fairly significantly and reduced litter as well.”

Despite the clear support, the Victorian government have time and time again voted down the introduction of a container deposit scheme. The Victorian Greens Party has had three attempts to get the policy through, with no support from either side of the political divide.

This has many Victorians asking the simple question: why is the government so opposed to a container deposit scheme?

There are currently three reasons the Victorian Government and opposition are citing as the ‘reasons’ why the state is not implementing a container deposit scheme.

1.       It will theoretically put consumers out of pocket:

In a statement after the last container deposit system vote, opposition environment spokesman Nick Wakeling said, “Whilst the idea of a container deposit scheme sounds good in theory, all evidence to date indicates that it will be consumers who will end up being out of pocket especially when councils are currently doing a good job with recycling.”[3] The practice of a container deposit scheme is based on refunding money to the consumer once they return the container. Therefore, this does increase the cost of eligible containers by 10 cents. However, this fact is widely known by the public and the concept of a scheme is still widely supported by both Victorians and the beverages industry.

One of the key reoccurring arguments against a container deposit scheme is the government are concerned it would jeopardise the state's kerbside recycling industry, to the point it would no longer be financially viable.[4] This argument was introduced by the former state Environment Minister Lisa Neville and has not been rejected by the new Environment Minister Lily D'Ambrosio.

However, according to Associate Professor Peter Bragge from BehaviourWorks Australia, the evidence suggests the opposite. In fact, research has showed that kerbside recycling marginally increases following the introduction of container deposit scheme legislation.[5]

3.       Investing funding in other recycling initiatives

The Victorian Government has not ignored the recycling industry; in fact, it has continuously invested in initiatives. This includes a recent $37million spend on its Resource Recovery Infrastructure Fund[6], spend on establishing new export markets and the development of a whole-of-government circular economy policy and action plan by 2020.[7]

Minister D'Ambrosio has backed her investment saying that it is focused on supporting the local market and that “councils have an opportunity to overhaul their recycling contracts so there are contingency plans in place and to boost competition between processing businesses." she further argued that the government "want competition in the market to encourage new operators to set up in Victoria and to invest in equipment [and] infrastructure upgrades.”[8]

The Victorian Government has also been strict on landfill regulations and has now banned electronic waste (or ‘e-waste’) from landfill and specified how e-waste must be managed. The new rules take effect on 1 July 2019.[9]

Whilst well intended, the current funding has not solved the pressing recycling issues.

On March 19 this year, protestors in Melbourne took their frustrations to parliament house with the #Recycling2Parliament rally.[10] The protestors had a clear message to the government: invest in a container deposit scheme. 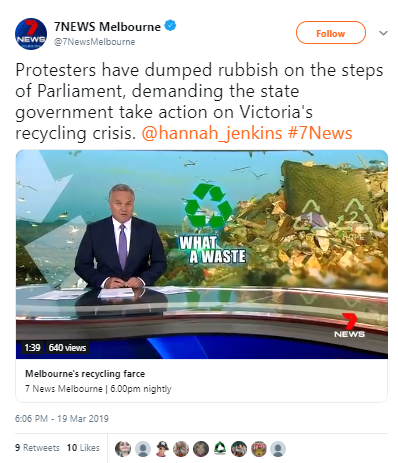 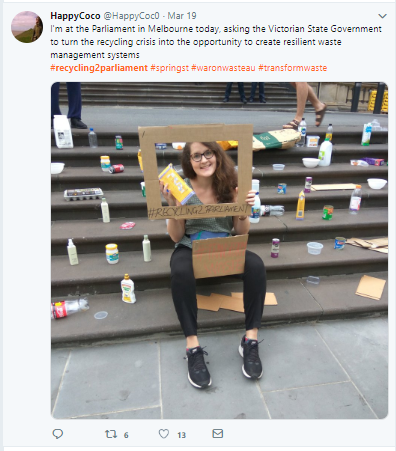 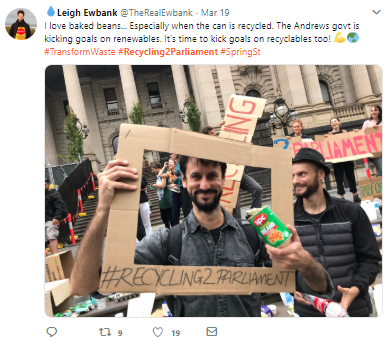 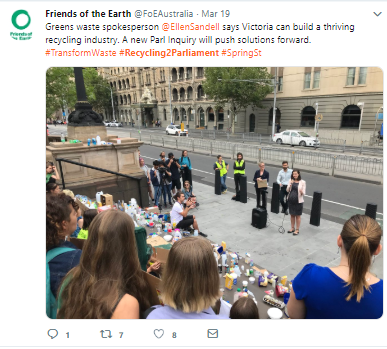 Dubbed by the media, Victoria is currently experiencing ‘another’ Recycling Crisis[11] with now one-third of councils currently dumping recycling into landfills.[12] Many claim this is a direct result of the China Waste Ban.

In February 2019, the Environment Protection Authority served notices on SKM Recycling in Coolaroo and Laverton North to stop accepting recycling due to the vast stockpiles of paper and plastic representing a significant fire risk. The company take approximately half of the state’s recycling. The action forced councils across the state to bury more than 1000 tonnes of recyclable paper, plastic and cardboard in landfill.[13]

This, and a plethora of other related issues including numerous fires at recycling facilities, has resulted in a parliamentary inquiry into the state of Victoria’s recycling and waste management system. The inquiry, proposed by the Victorian Greens, was endorsed by the State Parliament’s upper house in March 2019.[14]

Is a container deposit scheme the solution for Victoria?

Whilst there are continuous claims for a container deposit scheme, this alone will not solve the Victorian Recycling Crisis: but it will play a large role in the final solution.  The state is focused on developing a circular economy as stated in its Recycling Industry Strategic Plan.[15] The plan commits to developing a circular economy policy by 2020, which will build on Victoria's existing waste and resource recovery strategies, with a focus on waste minimisation and sustainable production and consumption.[16]

A research conducted by Monash University on 47 container deposit schemes concludes that “The 47 container deposit refund (CDR)schemes recovered an average of 76% of drink containers. In the United States, beverage container recovery rates for aluminium, plastic and glass in the 11 CDR states are 84%, 48% and 65% respectively, compared with 39%, 20% and 25% in non-CDR states. The figures are similar in South Australia, one of the longest-running CDR schemes in the world: 84%, 74% and 85% for cans, plastic and glass compared with national averages of 63%, 36% and 36%.”[17]

The Victorian Recycling and Waste Management Report (from the parliamentary inquiry) is due to be released in August 2019. Advocates hope the report will highlight the pressing need for a container deposit system; as so clearly seen by industry experts, the public and the beverage industry.

Mr Taylor (General Manager of the Australian Beverage Council) believes it is inevitable that Victoria will one day have a container recycling scheme. “The reality is we have seen the community support for these schemes in most of the other Australian states. Our view is that it is a matter of time before public opinion will induce governments to create these schemes in all states.”[18]