Scheming a Scheme when its NOT OK to Container Deposit

Container deposit schemes exist with the purpose to increase the percentage of total containers recycled. So, if people are collecting cans and bottles and recycling these shouldn’t that be a good thing? In this article, Container Deposit Systems looks at the legislation concerning Australia’s Container Deposit Schemes and highlights why you can’t and shouldn’t scheme the scheme.

In 1996, Seinfeld characters Kramer and Newman hatched a scheme to collect recyclable bottles from New York, where the deposit refund is 5 cents, and deposit them in Michigan, where the deposit refund is 10 cents. The plan has a wide range of variables until the pair finally figure out they can make the plan work! In true Seinfeld style, the pair is distracted by another task, end up getting shot at by a farmer… ultimately, they never make it to the deposit facility to implement the plan. 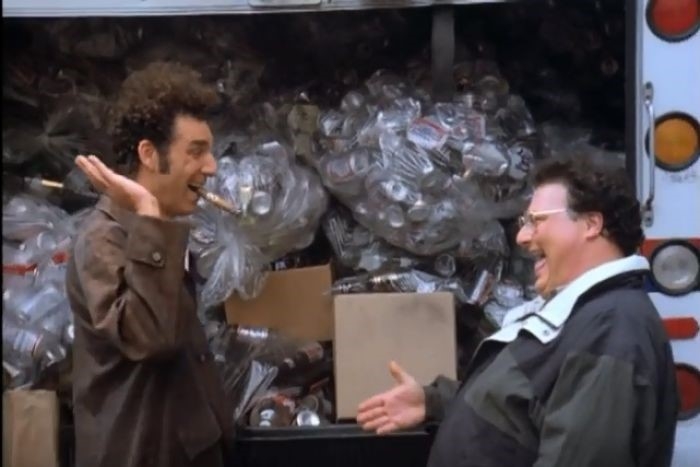 20 years later, in 2016, a man in Michigan faced US$5,000 in fines for attempting the exact same scheme as Kramer and Newman. Brian Everidge was accused of attempting to “return” more than 10,000 bottles from other states outside Michigan. The potential penalty: up to five years in prison for one felony count of beverage return of non-refundable bottles.[1]

In June 2018, a New South Wales man was fined almost $6,000 in attempting to scheme the South Australian container deposit scheme. The offence happened just over 2years prior in June 2016, when the man arrived at a recycling facility in Burton, SA, with 37 bales, four clear plastic bags, one garbage bag and two chaff bags filled with cans for recycling. At the time, NSW did not have a container deposit scheme. The value of the recycling goods would have been approx. $7,000.[2]

"It was a dishonest, planned, course of conduct involving the placement of a newspaper advertisement and the sourcing of cans from numerous sources in a deliberate attempt to obtain a financial advantage in South Australia to which the defendant knew he was not entitled.”[3]

So, what’s the problem with using the Container Deposit Scheme in other States?

South Australia has long been the leader in container deposit schemes; establishing the program back in 1977.  The second scheme was not established until 35 years later in 2012 in the Northern Territory. In December 2017, New South Wales launched its Container Deposit Scheme which met initial criticism. However, it is now developing as the scheme grows to more recycling facilities and locals adopt the new process.

Victoria and Tasmania remain the only states in Australia with no plans to launch a container deposit scheme.

To see the state of container deposit schemes in Australia visit: https://www.containerdepositsystems.com.au/articles/a-national-recycling-agenda

Container deposit schemes are a refund system, by which the purchaser of the container holds the 10c cost until it is passed onto the next stakeholder in the chain - in return for refunding the invested 10c. The below image highlights the process of the refund. 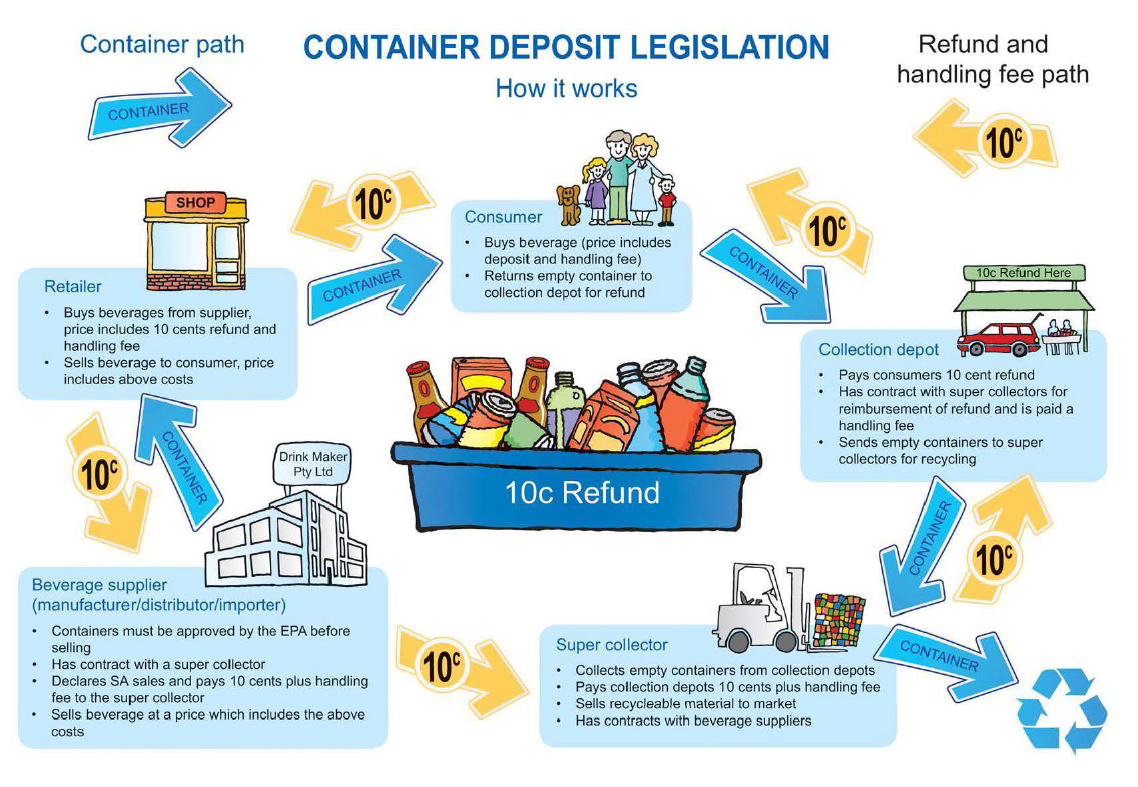 To enable this refund, legislation in each state allows Beverage Manufacturers (suppliers) to sell beverages for an additional 10c, with the purpose of ‘paying back’ this figure to the super collector when the container is delivered.

The core issue with a state-based program is: success relies on containers remaining in the ‘recycling system’ in which they were first purchased by the retailer. Ensuring the 10c refund remains in the economy in which it belongs.

In the current state-based model, containers bought in each state need to be redistributed back into the respective states recycling system to ensure the system remains funded.

If containers are not returned – or returned elsewhere - the Beverage Manufacturing companies receive an unfair gainful, and all that results is a hire purchase price for consumers. If too many containers are returned to states in which they are not purchased, money from that state container deposit scheme leaves the system and the state’s recycling economy.

Is it time for a National Container Deposit Scheme?

With the global plastic crisis increasing and the China waste ban impacting councils Australia wide, it is arguable that the time has come for national container deposit legislation.

In 2016, an Australian Marine Conservation Society poll highlighted that 85% of Australian’s were in favour of a National Container Deposit Scheme.[7] Our national waste problem was also highlighted in the 2017 ABC documentary, War on Waste (http://www.abc.net.au/tv/programs/war-on-waste/) sparking a national debate on how to ‘win’ the war.

Creating a national container deposit scheme could have numerous benefits for the recycling economy including:

Until there is a national scheme, the states and territories in Australia will continue to own, manage and enforce the laws concerning their container deposit schemes. So, ensure you deposit your containers where you buy and, don’t try to scheme the scheme!

Container Deposit Systems was formed with a vision to oversee the implementation of improved operational practices in recycling facilities.  The company offers a range of services to recycling depot facilities to drive productivity improvements and transition traditional recycling facilities into modern technically advanced operators.