Should we extend items eligible for container deposit schemes

Should we extend the items eligible for a container deposit scheme?

Yes. Yes we should.

Have you ever wondered why some items are eligible for your local container deposit scheme and some are not? The below list highlights the containers that are eligible and those that are not eligible in Australia.[1][2]

Beverages containers of less than one litre that have a 10 cent deposit are:

Beverage containers up to and including three litres that have a 10 cent deposit are:

Why some drink containers are exempt

The reason that wine and spirit bottles are exempt from all Australian Container Deposit Schemes dates back 40 years ago when the laws were introduced in South Australia. The purpose of the original container deposit scheme (in 1977 in SA) was to reduce drink container litter across the state. It was argued that wine and spirits, as well as milk and juice cartons, were consumed at home and therefore, they did not end up in street litter. Thus, the containers have always been exempted in South Australia.

When the NT and NSW container deposit schemes were established, they followed this model[3] and now today, this is the norm for the industry in Australia. However, many do not agree with this logic:

“Hypothetically, it's a theory that says a $40 bottle of one of Wildflower's barrel-aged blends or Nail Brewing's annual, high-end Clout Stout release is more likely to be found in a bush than a $5 bottle of cleanskin wine”.[4]

In addition to the argument that containers consumed at home are less likely to end up in the streets, there is also the argument that wine bottles are easier to sort at recycling facilities due to their colouring and high quality.

Further, there is a reluctance to impose an increase to the cost of wine in South Australia, which would be the case if wine bottles were introduced into the state’s container deposit scheme – according to the South Australian Wine Association.

In an interview in August 2018, Brian Smedley, the chief executive of the South Australian Wine Industry Association, said he would fight any move to introduce a deposit on wine bottles as such a move would increase costs across the wine industry. Stating: “I would go straight to the government to seek an explanation. It has been a long-standing argument that has been put to and accepted by numerous governments.”[5]

The benefits of increasing eligible bottles to container deposit schemes

Advocate for the change, KESAB executive director John Phillips, argues: container deposit was about litter, and it has evolved now to be about recycling. Around 700,000 tonnes of waste is picked up from SA kerbsides each year. Almost half is classified as “residual waste” which ends up in landfill, 190,000 tonnes is in organic green bins and 143,000 tonnes is recycled.” Phillips highlights that “taking glass, such as wine bottles, out of yellow-topped recycling bins would reduce contamination of paper and cardboard, while adding value to items such as laundry containers will lead to more being returned, rather than being thrown away.”[6]

Tasmanian Greens senator Peter Whish-Wilson also highlighted the issue with recycling glass in kerbside bins stating that “kerbside recycling collects large amounts of glass, but it does it badly. Bottles get smashed up in the bin, in the trucks and at the recycling centre ... Much of the glass that is collected is not actually able to be made into new glass products because it is too low-quality.”[7]

Time for a national container deposit system and circular economy

There is large support from environmental advocates to support a national container deposit system and drive the nation towards a circular recycling economy which would establish national based rules around what can and can’t be recycled. A national system is it would both encourage best practice across all states as well as enable a true circular economy to support manufacturing production of recycled goods.

Currently, the core issue of state-based schemes is the schemes only work if bottles are returned to the state in which they were purchased. This results in states such as South Australia (with high efficiencies) not able to support sorting and processes in states such as NSW (with high volume).

The creation of a national container deposit system would further support a nation circular recycling economy. The current linear process of recycled materials creates an exponential waste epidemic; meaning there is always more waste being produced than being recycled.  A circular economy encourages recycling manufacturing and reuse systems here in Australia; offering valuable economic opportunities for innovative businesses and the recycling industry. 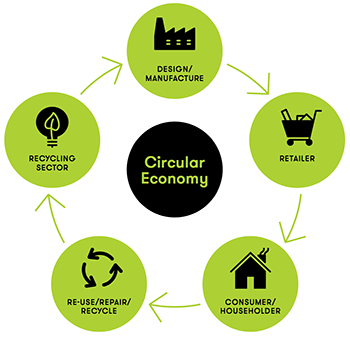 Until recently, Australia exported approximately 55% of recycled goods and China was our largest export market.[9] The recent ban on exporting to China means that now Australia needs to implement better recycling management systems.

KESAB executive director John Phillips is an advocate for the circular economy, highlighting that there is a need to transition to a “circular economy’’ - re-using as much discarded material as possible and seeing waste as a resource, rather than just rubbish, and making it into a new product.[10]

Container Deposit Systems is highly supportive of evolving our current container deposit schemes from a solution for ‘litter’ to a solution for recycling; which will ultimately support the greater Australian economy. Whilst the administration behind including wine and spirit bottles, milk containers and juice containers may be heavy; the load will be much lighter for the environment in the long run.

Container Deposit Systems was formed with a vision to oversee the implementation of improved operational practices in recycling facilities.  The company offers a range of services to recycling depot facilities to drive productivity improvements and transition traditional recycling facilities into modern technically advanced operators.